Why racism infects how leaders get chosen, and how to level the playing field 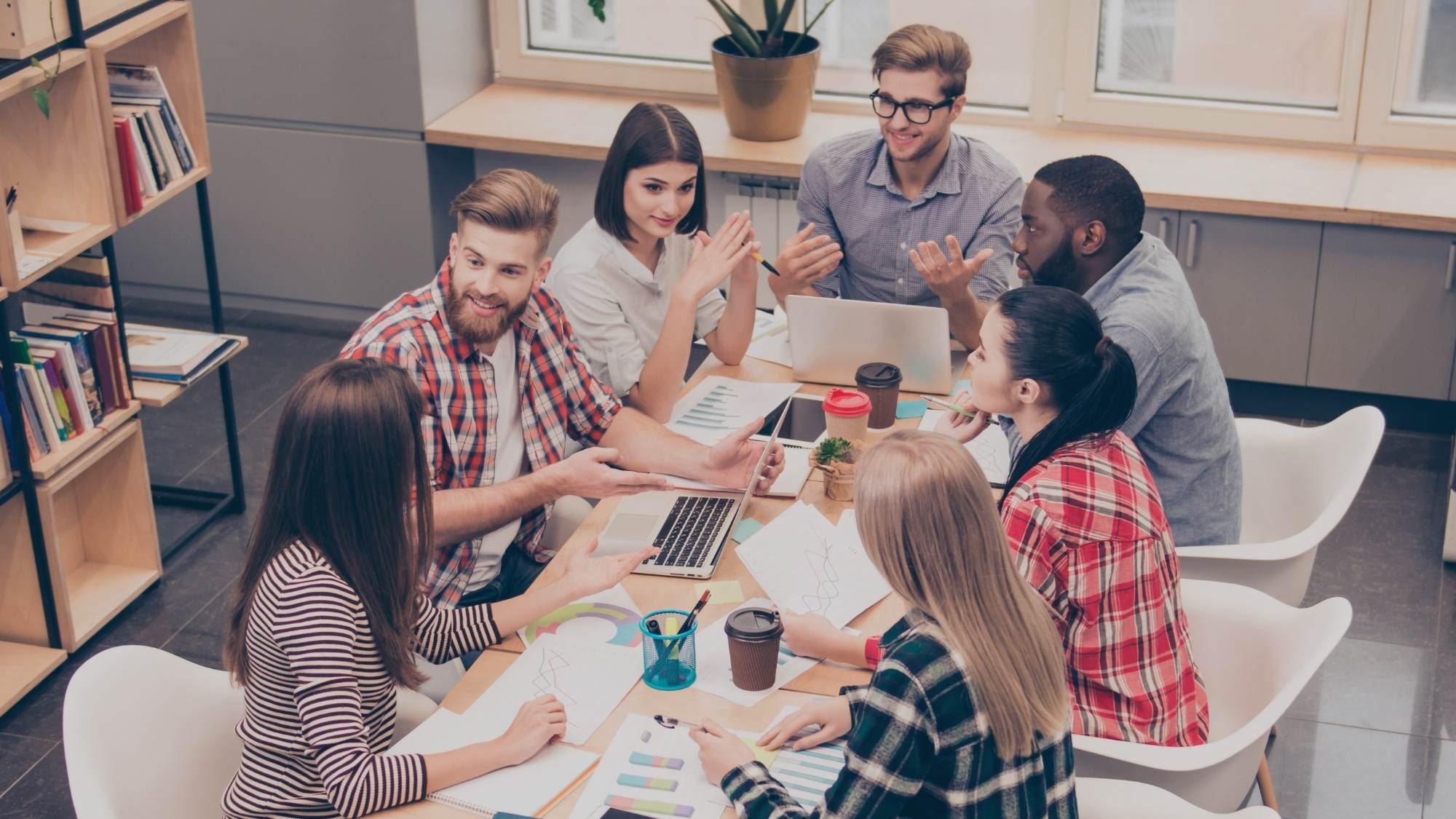 WHY are company leaders so overwhelmingly white?

And what does racism have to do with it?

Dive with me into the fascinating world of how our brains work, and how *mental short cuts* trick company leaders and their recruiters into choosing leaders based on the unconscious biases to which as human beings, we all fall prey.

The good news is: once we understand why a problem exists, we can solve it.

Below, I show how YOU can take action to level the playing field in 2022.

A Fortune 500 company recently asked me to make a presentation to their U.S. professionals about anti-Asian bias and how to create greater inclusion. It was an optional training, so we were delighted when 900 employees showed up, most of them allies.

I asked the attendees to anonymously write in what stereotypes they perceive American society holds of Asian Americans. Using the real-time survey tool Mentimeter, we created this word cloud, with each word scaled bigger or smaller according to how many times people entered it: 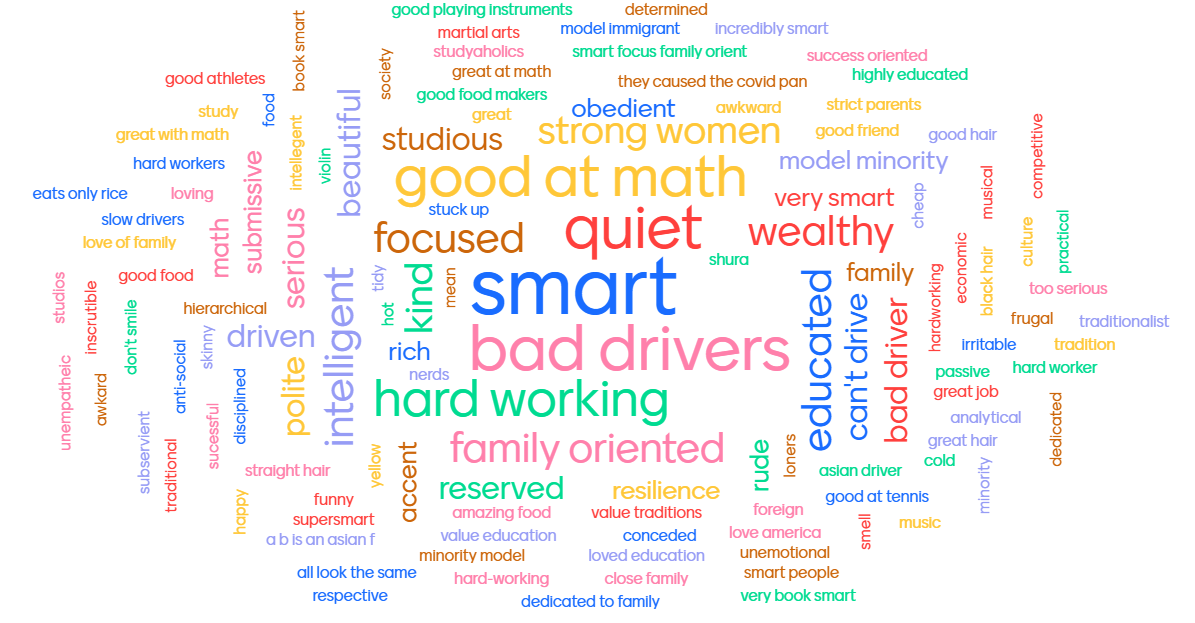 Now, you might think: these stereotypes don’t look too bad.

In fact, all stereotypes are harmful, because they prevent us from seeing people as individuals, and thus pave the way for exclusion and inequities.

Even something as seemingly harmless like the trope of Asians as bad drivers can quickly turn ugly.

Every positive stereotype comes with a downside corollary. A wealth of research shows that:

In fact, this “competent-cold” stereotype explains both the ongoing surge of anti-Asian hate on the streets and our exclusion in the workplace.

“Role incongruence” prevents Asian Americans from being selected as leaders

Having long been interested in the subject of cognitive biases, I did something really exciting during the pandemic: returned to grad school, at Cornell, to research at the front lines of organizational psychology and earn a certification in Diversity and Inclusion.

Here’s how this translates into the workplace:

In order to dispel any doubt about whether an Asian American is fit for a particular role, the bar is set higher for her constantly to have to prove herself, even though in many environments, she may not feel comfortable or safe enough to show her full self.

Add up millions of everyday interactions, and role incongruence leads organizations to be less likely to recruit, promote or invest in the careers of Asian Americans at senior levels.

Role incongruence impacts the careers not just of Asian Americans, but of women and all underrepresented groups.

If you’re Asian American, you may say to yourself, “But I’m sociable, and a great leader to boot. As soon as people get to know me, they’ll like me.”

Problem is, you don’t even need to act in a stereotyped way to be labeled that way. That’s how stereotypes work. People take one glance at you, their brains lump you into a group, and then immediately associate you with all the traits they hold of that group. 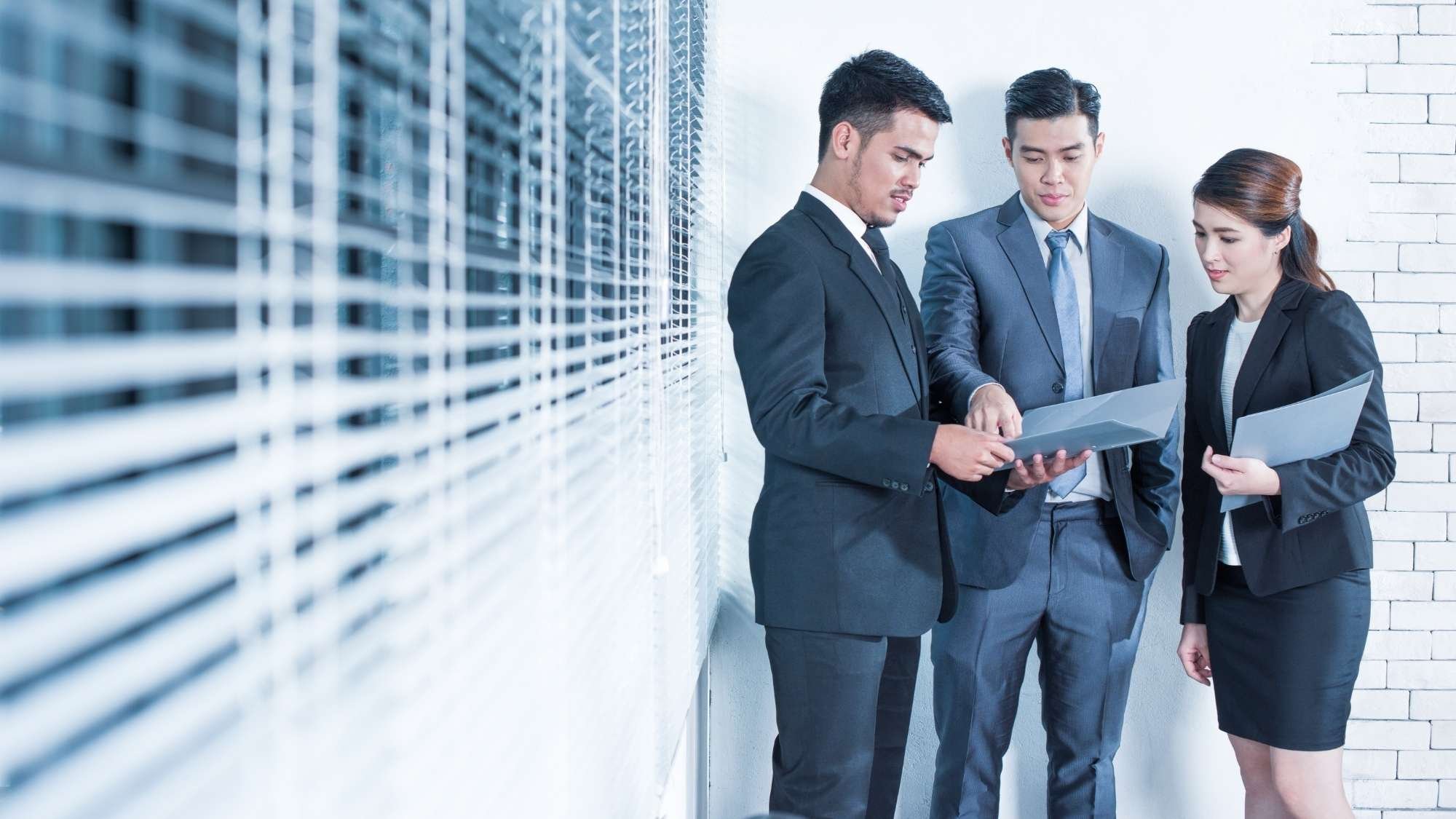 No one likes to be called a racist, but the truth is that our brains have evolved to use unconscious biases as our default mode of interacting with other people.

Scientists estimate that at any time, we're exposed to up to 11 million bits of information, of which our brains can only consciously process about 40 at a time. Our brains help us survive using biases, as mental short cuts, about who is likeable, who is valuable, who we can feel safe around.

Over time, we’ve became so good at using these mental short cuts, and they happen so quickly, that we believe what we are seeing is objective, when often it can be highly distorted.

Years ago, I had the chance to study cognitive biases in recruiting, when I was with the global executive search firm Heidrick & Struggles and a member of our global training team for newly minted Partners.

Our team was charged with helping our colleagues achieve excellence in recruiting leaders for global companies, and so we designed our training to address several forms of bias that commonly sneak into recruiting. For example …

We’re all predisposed to like people with something in common with us – same race or gender, or alma mater, or language, or similar lifestyles or social circles.

Affinity bias is a massive problem in recruiting. It shows up everywhere, even in something as simple as the fact that we prefer people whose names we find easier to pronounce.

Confirmation bias then causes us to notice only the information that confirms our expectations, and also to interpret information in a way that supports those expectations.

Someone may behave 8 out of 10 times in a way that disconfirms our biases and we won’t notice. Then, they act in a way that we expect, we get a dopamine hit and our biases get further reinforced in our brains.

After a meeting, confirmation bias further reinforces itself as we selectively recall the information that confirms our expectations, and forget the rest.

When it comes to choosing leaders, all these unconscious biases lead to self-fulfilling prophecies.

All this works the other way as well. 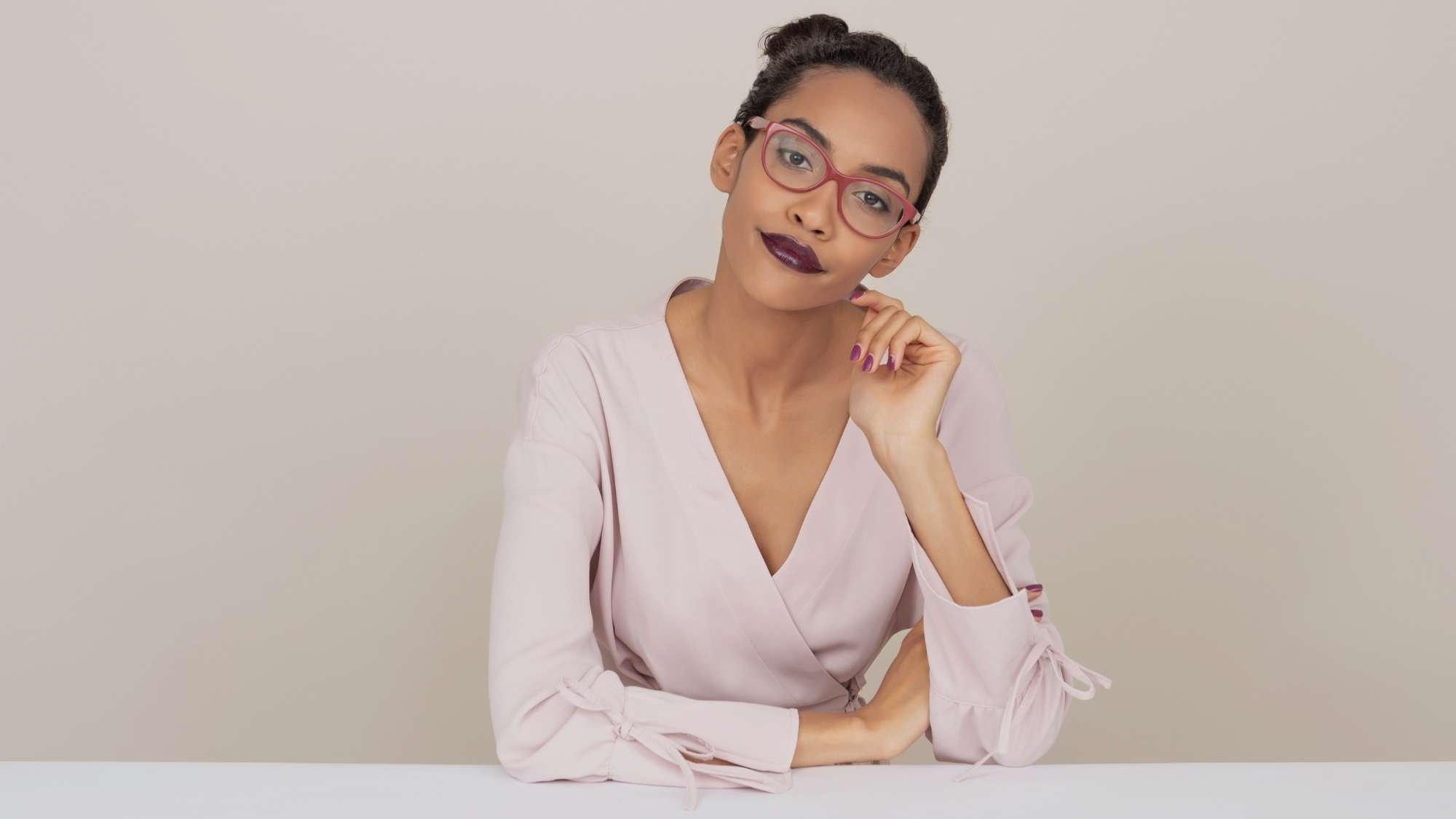 As Cornell organizational psychologist Lisa Nishii puts it, unconscious bias drives a vicious circle, leading to a continuous loss of self by out-group members and a continuous reinforcing of privilege for in-group members.

All this happens not because the people choosing senior leaders are bad people. For the most part, they’re good, accomplished, smart and thoughtful people.

And as Heidrick’s legendary Chairman, Gerry Roche, used to like to say,

“Search would be easy… if there were no human beings involved.”

Diversity programs have been less than successful in improving diversity

It takes a huge commitment of extra time, energy and focus to do the work of diversity recruiting – to reach beyond the same old networks to source diverse candidates, to show them the ropes of the process, to check your biases and those of your team – and none of this extra work is rewarded.

As a result, infusing equity and inclusion has become the unpaid housework of the corporate recruiting process.

And guess who is doing this unpaid housework?

The 2021 Women in the Workplace report by McKinsey and Lean In finds that women leaders are 2x as likely as their male peers to invest time in recruiting candidates from underrepresented groups.

When diversity work is not rewarded, then doing the work hurts the women doing it, and it hurts the companies and all their employees, because progress is rarely made on work that’s not measured or rewarded.

And women are getting burned out.

In this pandemic, companies are at risk of losing the very inclusion leaders they need most.

There is a better way:

Make companies stronger, more creative and happier places to work by incentivizing everyone to do the work. 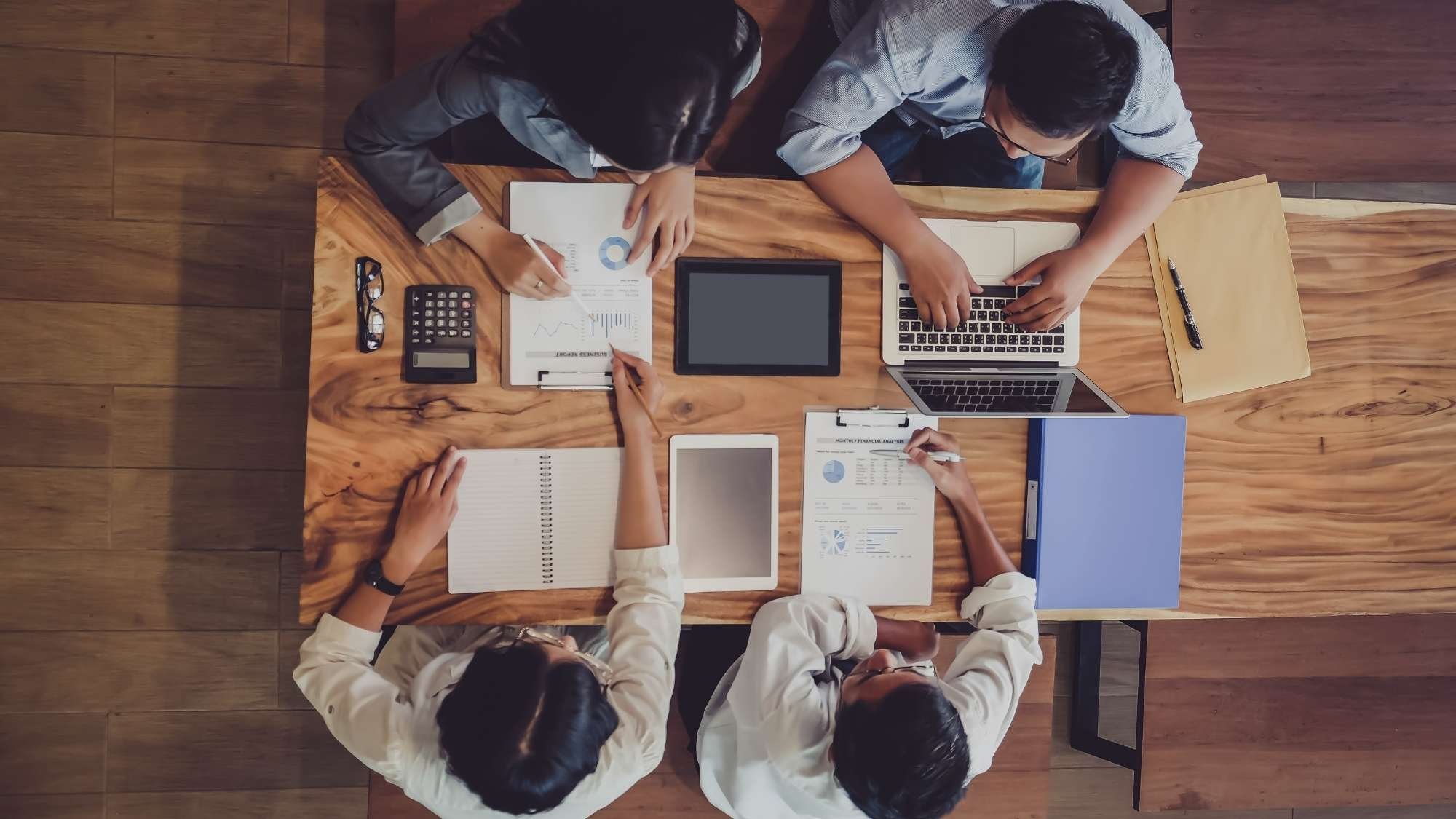 Inquiring minds want to know: How diverse is YOUR company’s leadership?

After several extensions, October 25, 2021 marked the final, FINAL deadline by which U.S. employers had to submit workforce diversity data to the federal government.

Importantly, the data must include race and gender breakdowns by seniority level.

And shareholders are increasingly demanding this data be made public.

Even the most sophisticated diversity policies can be undone by unconscious bias. Whether a company actually succeeds in diversifying their leadership will depend on millions of tiny everyday interactions by senior leaders and their recruiters.

Ergo: Now is a great time to start recognizing and rewarding the inclusion champions among your senior leaders and recruiters.

Offer them the training and tools they need.

How to level the playing field when choosing leaders

My #1 tip is that you keep challenging yourself by asking:

“Where could bias show up in what I’m doing right now?”

When you identify a bias, solve it then and there.

In fact, the process of dismantling bias is really fun, because it’s full of self-discovery and aha moments.

You can do this. You will get better with practice.

In future newsletters, I’ll write more deeply on how to drive greater equity, but here are a few ideas to get your creative juices flowing. If you're not in recruiting, you can extrapolate these tips to your sphere:

Excite each hiring committee member about innovating to bring in more diversity. Rather than focus on culture fit, seek culture add. Source qualified candidates from all backgrounds, not just the usual networks. Avoid group-think: don’t let anyone see anyone else’s feedback before submitting their own.

When you meet someone, notice yourself categorizing them into a group, notice how similar and different she is from you, and actively seek out disconfirming evidence. To keep myself honest, I take pages of notes. On the left column, I note all the candidates’ answers to my structured questions; on the right, I note, in real time, my impressions of the candidates. Afterward, I review my notes for bias.

3. Effectively onboard your new hires

Over 50% of all senior leaders brought in from outside fail within 18 months, resulting in massive direct and indirect costs. New leaders fail not because of a lack of skills, but lack of cultural and stakeholder support resulting in organ rejection.

As Asian Americans are America’s perpetual outsiders, the risk of organ rejection is even higher, as are the benefits of an effective integration toward expanding your overall culture of inclusion. Create and implement a holistic, strategic 90-day onboarding plan to accelerate integration and have them making impact fast. 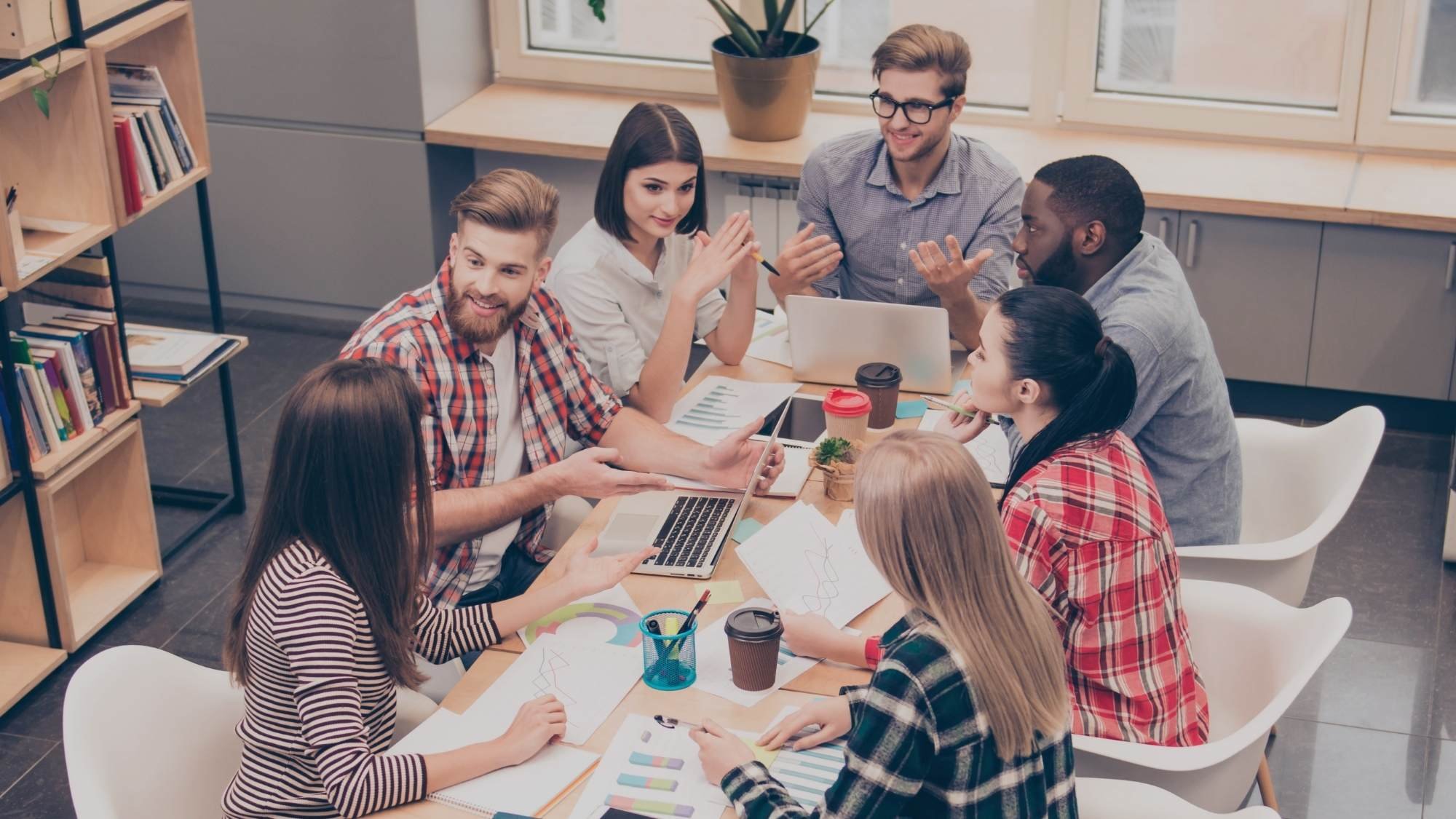 Dismantling bias is fun and necessary to our becoming better leaders

In the decades that I’ve been working on the project of driving equity into recruiting, I am more optimistic now than I ever have been.

Because when we bring in people different from ourselves, it’s not just the organization that benefits.

Indeed, we each have much to gain from working with people from all different backgrounds. Being around people who are different from us makes us smarter, more creative and more empathetic. In the past two years, many of us have had an awakening and renewed commitment to racial justice. And now as never before, it’s become obvious that, in our multi-cultural world, you can’t be a leader and only surround yourself with people who look like you.

The leaders of today and tomorrow want to be inclusive.

I'm glad to be in conversation and community with you! Please follow or connect with me on LinkedIn here.

If you feel others would benefit from this newsletter, please share it with your community. To receive it to your inbox, subscribe here. 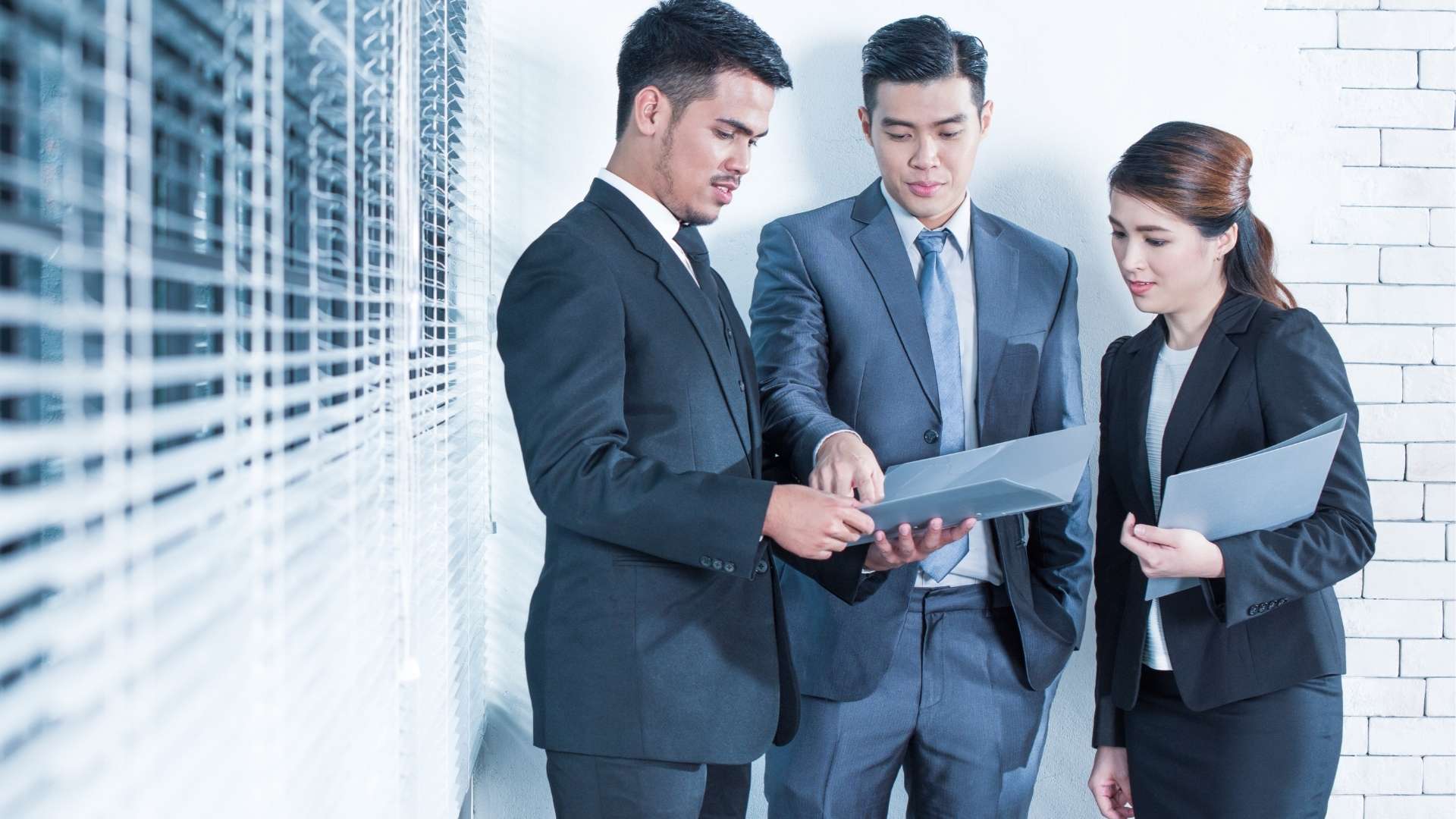 Thanks to the Model Minority Myth, most Americans assume that Asian Americans are “doing just fine.” In fact, we suffer from an ❗Age 30... 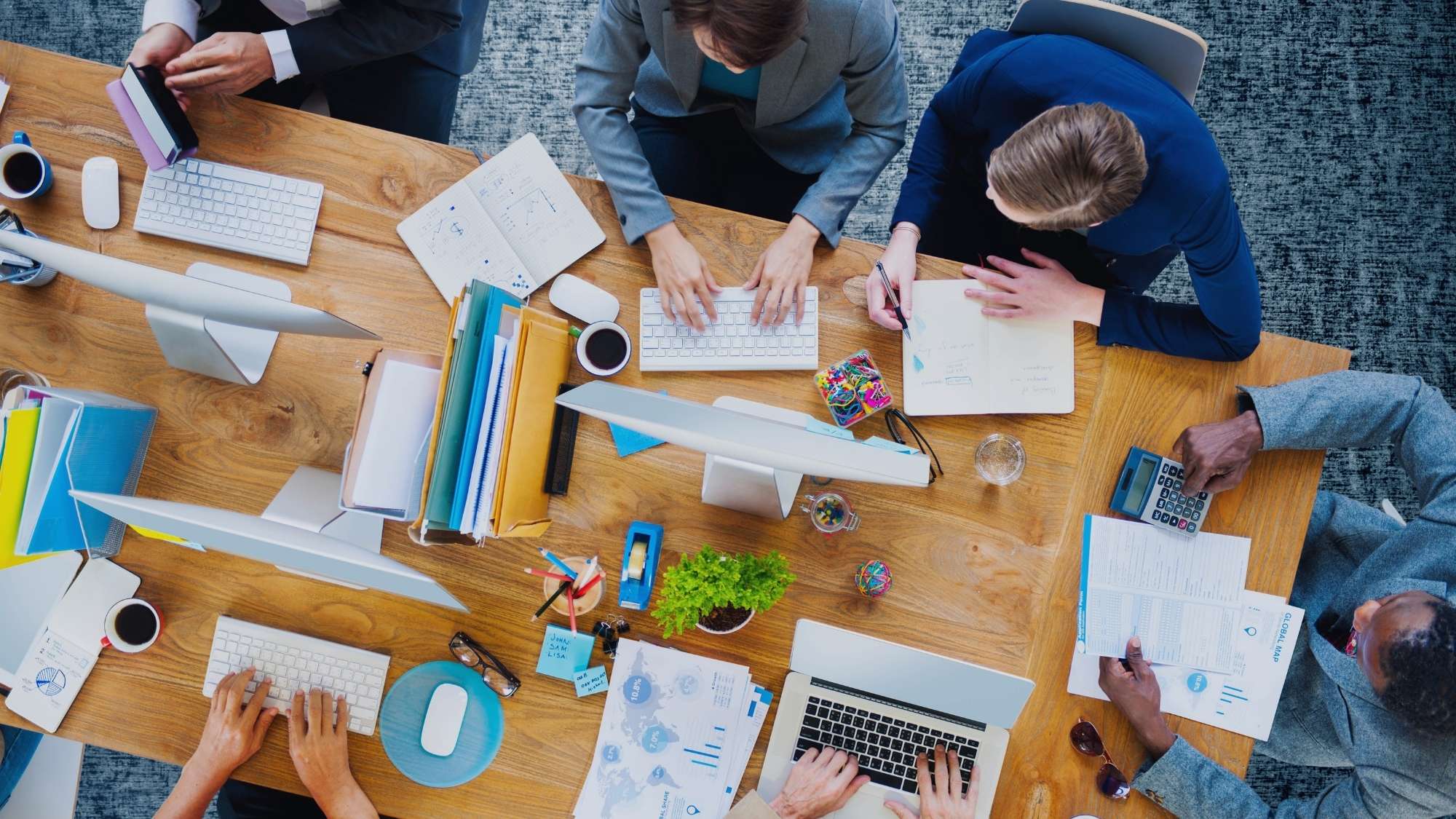 How to Use Organizational Network Analysis to Operationalize Inclusion

SUMMARY:  By now, an overwhelming majority of companies have committed to inclusion, but many struggle to operationalize it...

Why racism infects how leaders get chosen, and how to level the playing field

WHY are company leaders so overwhelmingly white?

And what does racism have to do with it?